The role of philanthropy in China’s war on poverty

China’s President Xi Jinping declared victory in eradicating absolute poverty in February 2021. According to President Xi, this seemingly impossible task of lifting more than 98.99 million people out of extreme poverty was accomplished ten years before the schedule outlined by the UN Sustainable Development Goals and can serve as an inspiration and reference point for other developing countries.

The elimination of extreme poverty for people everywhere by 2030 is the first Sustainable Development Goal and has been a key policy of since President Xi took power in 2012. China has reportedly lifted nearly 100 million members of its total population out of poverty in the last decade. Extreme poverty in China was defined in 2021 as earning less than $620 a year or $1.69 a day. In autumn 2022, the World Bank defined extreme poverty as living on less than $2.15 a day, a 13 per cent increase from the $1.90 a day measure used since 2015.

Poverty elimination has been a mass mobilization campaign in China. To accomplish this task, the Chinese government encouraged financial institutions to lend more and support local projects, as well as the private sector to contribute through investment funds and charitable foundations.

In the final report of the Centre for Asian Philanthropy and Society (CAPS)’s four-part series China Issue Guides series, we look at how individual and corporate philanthropy contributed to poverty alleviation in China.

As CAPS database illustrates, infrastructure development, income-generating support, and financial assistance for basic living expenses were the most common interventions to alleviate poverty in China in the years 2017 to 2018, the height of the government’s campaign.

Among these, income-generating support included efforts to develop economic activities adapted to the resources available in each locality. Philanthropic efforts sought to establish and support various forms of business and industries such as e-commerce, photovoltaic power generation, and tourism. 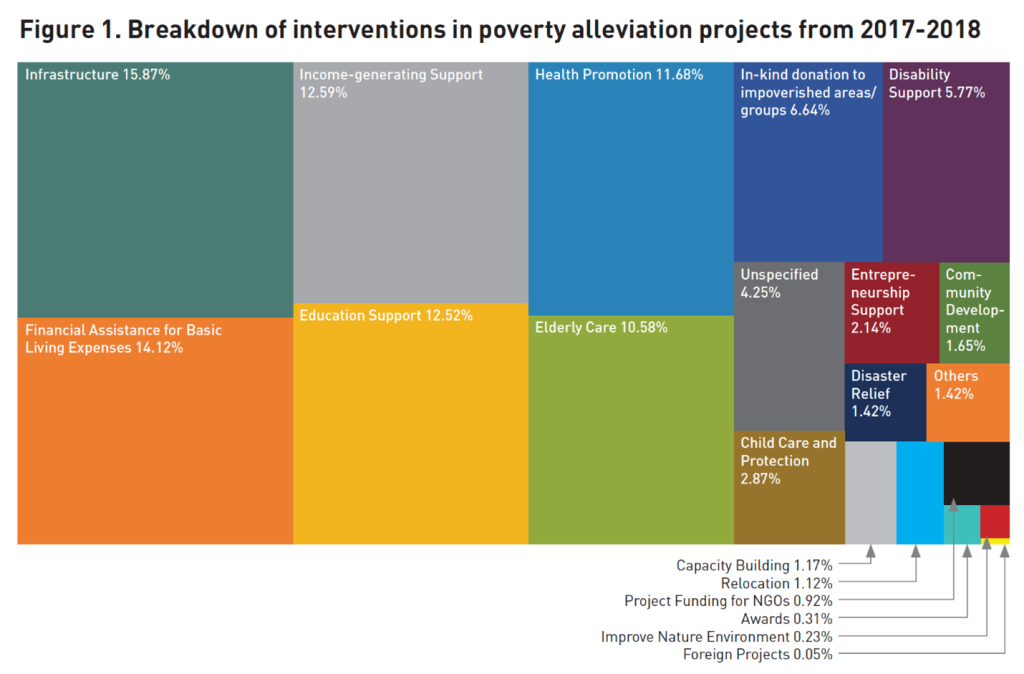 During this campaign, we could see how each sector of Chinese society was given explicit and implicit directions on how they should contribute to poverty alleviation. Companies were assigned specific localities to focus on during this period.

Another viable channel for reducing poverty was education support, which included scholarships, summer or winter camps, and additional learning opportunities for students to prepare them for life beyond poverty. It adhered to the state’s belief that ‘eliminating spiritual poverty is essential’ and emphasized self-assessment and self-development skills so that the students may become confident and self-sufficient workers.

As China moves toward its goal of achieving common prosperity, it will need to tweak the model used in the poverty alleviation phase to bring about more durable, institutionalized change. The China Development Research Foundation’s Deputy Secretary-General, Yu Jiantuo, described some of the major challenges ahead as wide income distribution gaps, a large number of people living in relative poverty, the multidimensional causes of poverty, and the high poverty rate among seniors and other key groups[1].

CAPS has identified key characteristics of Chinese philanthropy – aligning with the government, using business resources, finding win-win solutions, and giving closer to home. During the poverty alleviation campaign, we saw that these characteristics were borne out in three important ways:

Rural revitalization builds on the successes of the poverty alleviation campaign to put in place institutions meant to prevent the poorest areas from sliding back into absolute poverty. Wang Jun, Deputy Secretary-General of the China Foundation for Rural Development, described this transformation well. He recently stated at a CAPS conference that, ‘During rural revitalization, our foundation has shifted its focus from addressing the needs of poor people from ‘having nothing to having something’ to addressing the needs of low-income populations in rural revitalization ‘from having something to living well’. There are a variety of types of support that can be provided, such as health care, education, and livelihoods.

Our research provides specific project examples of how corporate philanthropists engaged. One such example is China Resources Group’s 1-billion-yuan initiative to build ‘Hope Towns’ since 2008. This comprehensive project includes efforts to improve the environment, provide industrial support, improve local governance, and reshape the spiritual life of each of the eleven ‘Hope Town’ communities. The project has directly benefited over 10,000 farmers and 3,000 households. After building basic infrastructure in these hope towns, the company has continued to provide capacity-building opportunities and income-generating support to farmers to avoid people falling back into poverty.

Although all those in the 832 poverty-stricken counties have been lifted out of poverty, some remain at risk of regressing more than others. Accordingly, 160 counties in 10 provinces have been identified by the Chinese government as key regions for rural revitalization based on the production level, income, and poverty risk.

The government is asking for similar support as they received during the poverty alleviation campaign in order to continue developing these 160 counties. Thus, these regions still require income-generating support, industrial development, investment, infrastructure construction, and financial support for health care and education.

Last but not least, Chinese philanthropists are always keen to support their local communities. While supporting the government to aid the 832 designated poorest counties, philanthropists and foundations also want to work closer to home.

It is only natural to want to support the local community, especially the disadvantaged, the elderly, and the disabled. During our studies, we have seen some efforts to alleviate poverty closer to home, such as projects that provide economic and healthcare assistance to migrant families and to the elderly.

There was indeed a poverty alleviation campaign – a five-year concerted effort to reduce absolute poverty in the world’s most populous nation. Nevertheless, the Chinese government realizes that declaring victory will not suffice. Now, the country is focusing on rural revitalization, a longer-term effort to create economic opportunities, mitigate catastrophic health costs, and educate all Chinese citizens. Our studies of how philanthropy works in China show that foundations and individual donations will undoubtedly be part of that ongoing effort.

Alliance magazine is collaborating with CAPS to publish a series of four articles about ‘Philanthropy with Chinese Characteristics’ over the next several months. Drawing upon the insights of CAPS’ latest China Issue Guide Series, each piece will dive into the features of Chinese philanthropy addressing health, environment, education, and poverty alleviation. Read the full report.

Angel Chiang is Manager, Advisory and Research at Centre for Asian Philanthropy and Society (CAPS).