UK foundation giving to environmental causes is on the up, but still a drop in the ocean

After years of little change, annual giving from UK foundations for environmental work nearly doubled between 2015/16 and 2018/19, a hugely encouraging upswing.

At £222 million, annual giving levels still have a long way to go to meet the scale of the challenge (this figure represents just 6% of total UK foundation giving in 2018/19), but our forecast indicates that the trajectory will continue to rise steeply. 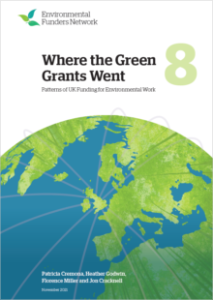 These are the key takeaways from the latest edition of the Environmental Funders Network’s Where the Green Grants Went series, which examines environmental giving from UK-based foundations and lottery sources from 2016/17 to 2018/19 (the latest year for which full datasets are available) in comparison to previous years.

The strong upward trend in UK foundation giving towards environmental causes is reassuring after years of shockingly low giving levels, and another sign that environmental concern from the public more broadly is on the rise. The increase in environmental giving resulted from a combination of established ‘green’ funders upping their giving and new foundations joining the space. Both these trends will likely continue: there have been some significant new environmental grants programmes since the period covered by our analysis. A notable example is Quadrature Climate Foundation – a climate-focused foundation established in 2019 which gave over £20 million in its first ten months of operation and continues to ramp up its giving.

There is undoubtedly ample need for more funding to address the environmental emergency we’re facing. Total funding for environmental work from foundation and lottery sources combined in 2018/19 amounted to £313 million: a figure that pales in comparison both to the scale of the nature and climate crises, and to the levels of funding driving these crises. Global fossil fuel subsidies, for example, amounted to a massive US$5.9 trillion in 2020. Philanthropy will never meet these levels, of course: its role is to catalyse and amplify, honing in on points of leverage so that relatively low levels of capital can affect significant change. But in this crucial decade, every little helps.

While the amounts of funding going to every environmental issue in our taxonomy increased along with overall giving, certain key issues continued to be broadly overlooked by funders: in particular consumption and waste, toxics and pollution, trade and finance, and transport (which we refer to as ‘Cinderella’ issues, as they have long been underfunded). These thematic areas include key drivers of environmental degradation, so it is of real concern that they continue to attract very low levels of funding.

Perhaps more surprisingly, the share of climate-focused funding relative to other environmental issues did not change significantly. Although the absolute amounts involved did increase, they remained a staggeringly low proportion of total UK foundation giving (2% in 2018/19), even though climate change will doubtless affect almost every issue of philanthropic concern. This reflects findings that foundation spending on climate was less than 2% of total foundation giving in Europe and globally in 2020. The extent to which the heightened levels of attention on climate issues in the build-up to COP26 will influence the profile of climate funding remains to be seen.

The increasing share of UK foundation funding to North America (where environmental philanthropy is significantly greater than in the UK) alongside declines in funding to Africa, Asia and Latin America were also eyebrow-raising, given that UK foundations might arguably expect to have greater impact in regions where local philanthropy is still at relatively low levels. Within the UK, funding continued to be skewed towards England, while levels of funding in Wales and Northern Ireland, in particular, remained relatively small, and in the UK Overseas Territories – home to the vast majority of the UK’s unique species – were smaller yet. We encourage funders to consider the availability of local sources of funding, in addition to strategic global impact, when looking to support work in a particular region.

We were struck again by the extraordinary numbers of grants and grant recipients focused on environmental issues, suggesting high levels of duplication and inefficiency across the system: two-thirds of the more than 5,300 grantees each received less than £10,000 in foundation funding over three years. While we know that funding at a range of levels can have a meaningful impact (see our Stories to Inspire for examples), when grant funding is spread so widely and thinly we have to wonder if it is fulfilling its potential to support a resilient and effective environment sector. We encourage funders to seek opportunities to foster collaboration in the sector, thus helping to improve efficiencies and reduce duplication. Funders could also consider how they themselves might work better together – such as by aligning their application guidelines or creating systems for sharing their knowledge.

We are fast approaching the point of no return when it comes to the climate and nature crises. Now is the time to mobilise every resource we have. After eight editions of this research, to finally see the astonishingly low levels of funding for environmental causes get a real boost is incredibly heartening. But while the available funding remains so low in comparison to the scale of the crises we’re facing, how exactly those limited funds should be disbursed to maximise their impact remains a critical question – and one that our findings clearly indicate needs greater attention.

We welcome your thoughts on how EFN might better support both funders and fundraisers as we continue to work towards our goals of increased and more effective environmental philanthropy. Please get in touch with us at info@greenfunders.org.