We should be more open about failure… in the right way

Many projects both succeed and fail. Therefore, talking about failure takes a sense of nuance, and it’s important to not pass judgement too soon.

In a world where issues are becoming increasingly complex, we must be able to embrace not only the successes but also that which didn’t go as planned – or maybe completely wrong. That is top of mind for many of us working in philanthropy right now – and also the theme of the latest issue of Alliance magazine.

Our unique role in society demands that philanthropic foundations are brave and willing to take risks. The philanthropic task entails addressing problems and entering fields that present challenges. We are able to look far ahead, and we can set the bar high. Therefore, we must be more open about failure – because if everything is a success, we haven’t set the bar high enough.

Let me give you an example of a Realdania project that didn’t go as planned.

Less than 20 years ago, Realdania entered into larger impact investment, which today we would probably call a Mission Related Investment. So, a commercial investment that was supposed to generate economic return, but also supported a field that was close to our mission and our field of work: the built environment. It didn’t go well at all. We lost all the money – and it damaged our reputation.

For many years, Realdania stayed away from commercial investments that overlap with our philanthropic efforts in Denmark. In effect, fully separating the commercial investments and our philanthropic activities and grants. Right up until a couple of years ago, when we started building a new portfolio of Mission Related Investments, that are supposed to generate both a financial and a philanthropic return. Having learned from the past, we now approach this slowly and thoroughly. For example, we’ve visited skilled and ambitious foundations around the world, who were ahead of us in this area, and their generous sharing of knowledge has been essential to our revised thinking.

Was the past attempt a failure, then? Perhaps. Did we make mistakes? Definitely. But at least we’ve learned from them.

In the philanthropic sector, many of us do work seriously and systematically with evaluation and learning. In Realdania, we have just started the initiative ‘Realdania Revisit’, in which we review a large number of the projects that we have supported over the last 20 years. An interdisciplinary team, that includes ethnologists, revisits projects that have existed for more than five years to see how they have developed. Did the original business plan hold up? Is the building maintained and looked after as predicted? And does it meet the ambitions and expectations of the users?

The goal is to embrace both successes and failures; not to point fingers but to become even better at funding projects in the future. So far, we’ve revisited more than 100 projects, initially within our campaign, Underværker (‘Wonderworks’), in which we support enthusiasts and volunteers in creating new places for local communities. We have come upon many great successes, but also projects that no longer exist as well as some that have ended up entirely different than planned.

Local enthusiasts and volunteers are important drivers when it comes to creating local development and cohesion. But we can also conclude that they are quite different. When young people run projects in larger cities, it tends to be temporary, whereas slightly older people in the countryside are often engaged in projects for several years. That’s an important finding for our future work, as it might be beneficial to focus more on how to support and empower young groups of enthusiasts.

In Realdania Revisit it has become evident that we mustn’t jump to conclusions too soon. A project that experiences initial difficulties can become a long-term success. On the other hand, successes can be short-lived and fleeting. Finally, we must pay attention to details and nuances and consider if the terms success and failure are even relevant. Many projects entail both and the conversation shouldn’t be black and white, when we and our collaborators are to learn from them.

Most people will agree that talking about your mistakes and learning from them is important. It´s easier said than done, though. In my experience, we are actively trying to learn from our mistakes, both in our in-house discussions and when different foundations are sharing knowledge. The greatest barrier, I think, is when it comes to being open with the public. Here, there are also important considerations for our collaborators to take into account. Sharing mistakes and learning is a delicate balance. In my opinion, it’s not essential to point to specific projects to talk about where we can improve; the need to communicate explicitly about possible failures must not result in disregard for our external collaborators and applicants. On the other side, our considerations for other parties must not keep us from communicating. This is the balance we need to find.

I’ll be the first to admit, though, that we can be better at this. Open communication about failure takes both courage and confidence in the fact that our surroundings will view it positively when we dare to share our experiences – also when things don’t go exactly as expected. Let us be inspired by the words of Nelson Mandela: ‘I never lose – I either win or learn.’

Jesper Nygård is the CEO of Realdania, the Danish philanthropic association, which was established in 2000 and has supported more than 4,500 projects with approximately 22 billion Danish kroner over the years. Realdania’s mission is to improve the quality of life by developing the built environment. 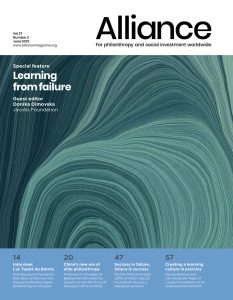 Admitting failures and learning from them contributes to better philanthropy. Yet many foundation boards and staff find it difficult to have conversations about mistakes. This issue of Alliance explores what it takes to learn from failure with people and organisations who have set out to change not only their practice but also their outlook. Guest edited by Donika Dimovska, Chief Knowledge Officer, the Jacobs Foundation, Switzerland.

Tagged in: Learning from failure