While sports-loving Europe was fixed on Paris because of the finals of the EuroCup, the European members of the EDGE Funders Alliance (‘Engaged Donors for Global Equity’) gathered not far from the French capital to discuss how philanthropy can advance just transitions to a fair and sustainable global society.

The meeting marked a historic moment in the work of EDGE, since it was the first formal meeting of the EDGE Europe group one year after its inception, effectively moving EDGE from a US-based to a trans-Atlantic and international affinity group for systemic change philanthropy.

The meeting took place in the Charles Léopold Mayer Foundation’s ecological farm and retreat centre La Bergerie de Villarcaux, the ideal setting to look at the transition from our current extractive economy to what was called ‘a living society’. The two days exchange focused on how EDGE can contribute to advance transformational change, for example through strengthening the Commons, through shifting investments according to ethical considerations, and by scaling up of initiatives like Transition Towns or Food Forests, which exemplify the future visions discussed at the retreat. 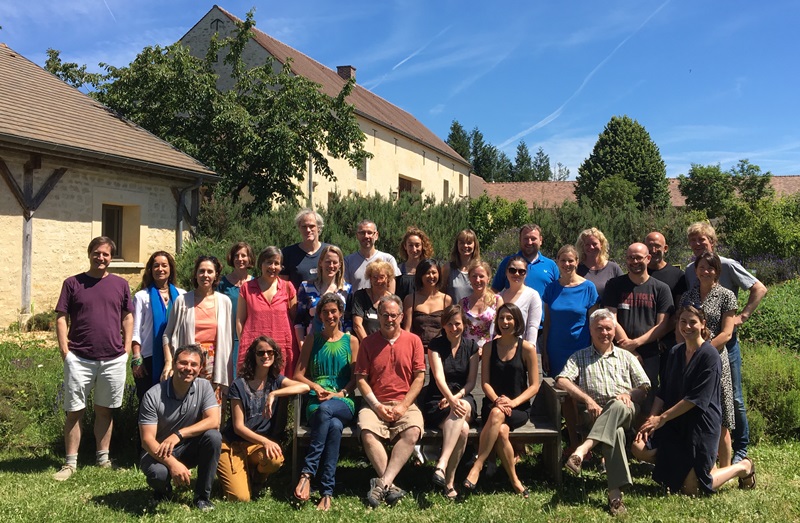 The 30 participants, representing EDGE members and partners as divers as the Open Society Initiative for Europe, German Bewegungsstiftung, Dutch Both ENDS or the European Cultural Foundation, to mention only a few, searched for an equilibrium on how to balance work on ‘building the new’ – the vision of a society embracing deep democracy, cooperation and care of people and planet –  and the necessary actions taken within our current extractive economy to ‘end the bad’ and achieve changes in the fundamental rules and governance that determine our global system today.

Next year, EDGE will bring the global Just Giving Philanthropy conference for the first time to Europe. Again, EDGE managed to find the ideal setting: The yearly landmark gathering ‘for funders, with movements’ will take place in Barcelona, which marks the way towards fundamental change, both at governance levels and through its burgeoning activism landscape that constantly challenge the status quo and inspire through experimentation with alternatives.

The EDGE Europe retreat 2016 was a great consolidation of the network and has definitely energized the group to reach to a wider group of its peers as well as to continue connecting to civil society and social movements in Europe and beyond.