The courage of Iranian girls and women taking to the streets in protest, removing their hijabs in defiance of unjust clerical rules, and demanding their fundamental rights captured the world’s attention. From schoolgirls to elder women, protestors continue to raise their voices, undeterred by the threats of arrest, torture, and death at the hands of security forces.

In our work at the Urgent Action Fund for Women’s Human Rights, we partner with women, trans, and non-binary activists like those in Iran taking numerous risks – physical and emotional, visible and less visible – to fight for a just and equitable world. We often wonder what might be possible if the philanthropic sector acted with a commensurate level of boldness. When the stakes are higher than ever, with democracy under attack and an existential climate crisis, how should funders even think about risk in our grantmaking?

If we want to see social transformation, we must accept the inevitability of risk. Activists are working to dismantle oppressive systems that benefit the powerful: we can’t expect that won’t come without pushback. And the trends we are seeing suggest that the risks activists are facing will only increase. More and more countries are restricting civic space, with only 3.1 per cent of the world’s population living in countries rated as open. The rise of authoritarian regimes is fuelling attacks on women’s and LGBTQ people’s bodily and political autonomy. Land and environmental defenders face escalated threats, with nearly four defenders killed each week in 2021 and women defenders targeted with gender-based violence, intimidation, and smear campaigns. Conflict and post-conflict settings pose yet another layer of risks to human rights activism. In Ukraine, UAF grantee partner Insight is one of many human rights groups that chose to stay in the line of fire and risk their lives to provide humanitarian support to their communities and the wider population – all the more remarkable considering the violence and backlash that Insight has faced in response to their public LGBTQI+ activism.

Risk is inherent to the work we do, which means our task is to navigate it with care – one of the feminist principles of philanthropy that we embrace as the Urgent Action Fund Sisterhood. Traditional philanthropy speaks of ‘risk management,’ which often means trying to control the uncontrollable. This cautious approach to risk can lead funders to pull back on funding when changes in a country’s political situation make progress seem unlikely or when restrictions on civil society require less orthodox means of making grants. It can lead funders to make overly restricted grants because concerns about demonstrating tangible results take precedence over grantee partners’ actual needs. It can cause funders to make seemingly safer bets, funding the tried-and-true, instead of taking a chance on unconventional ideas.

Yet these times demand more of us. We often talk about the risks involved in our partners’ activism. But there’s also risk in philanthropy not taking bolder action to meet this moment – the risk of losing our rights, a habitable planet, and so much more. If there was ever a time for funders to drop requirements, be more creative in moving money, resource security and wellbeing, and provide abundant flexible funding to the activists fighting for us all, that time is now.

To be clear, accepting the inevitability of risk in funding human rights work does not mean shirking our responsibility to address it, including by taking care with our operations and ensuring our practices do not add to the risks our partners face. At UAF, we are continually adapting our grantmaking to ensure that we can continue to fund politically sensitive work, including in countries where activism is criminalized. We also work closely with our partners to understand and resource their holistic security and well-being needs. This can look like funding legal support, counselling to heal from trauma, or evacuation for activists and their families. It can look like a grant we made to a coalition of Muslim women leaders in New York City, exhausted by onslaught of racist and xenophobic executive orders from the Trump administration, so they could organize a retreat to connect as humans, regather their strength, and stay in the work.

Long-time activist Ash-Lee Woodard Henderson calls on donors to ‘fund us like you want us to win.’ From Iran to Ukraine to the United States, the risks that activists are taking are immense and they are on behalf of us all. Let’s ensure that our resourcing meets their needs and matches their boldness – so we can win. 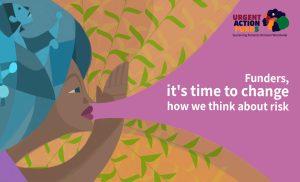 This blog is part of a series by the Urgent Action Funds, unpacking how they practice their recently launched Sisterhood Feminist Principles of Philanthropy in their day-to-day work. The Urgent Action Funds are a global consortium of feminist funds that provide rapid and responsive support for women and LBTQI+ human rights defenders in moments of need, sustaining feminist activism by supporting the resistance and resilience of frontline defenders.

The December 2022 issue of Alliance magazine will explore the role of philanthropy in crises and suggests that acting before the fact – rather than simply reacting – is the way ahead. The issue is guest-edited by Patty McIlreavy and Regine Webster of the Center for Disaster Philanthropy.

Subscribe today to make sure you don’t miss it!