The W.K. Kellogg Foundation today announced Racial Equity 2030, a $90 million initiative calling for bold solutions to drive an equitable future for children, families, and communities around the world. 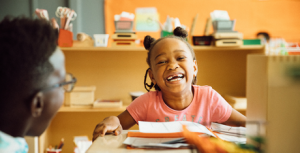 Racial Equity 2030 seeks to scale transformative ideas that will improve the lives of children, families and communities across the globe. Photo courtesy of the W.K. Kellogg Foundation.

‘Racial Equity 2030 is an invitation to build on this moment and advance equity,’ said La June Montgomery Tabron, president and CEO of the W.K. Kellogg Foundation. ‘At the Kellogg Foundation, we know that change happens through people and their collective action. That’s why we’re awarding $90 million to fuel creative and actionable solutions to achieve racial equity in the next decade.’

The announcement comes just days after the Ford Foundation also made a new funding pledge toward racial justice work, announcing a further $180 million. The funding comes from the proceeds of the unprecedented sale of $1 billion in social bonds. This brings Ford’s total funding commitments to racial equity up to $330 million through 2021.

‘Our most urgent priority for this infusion of funds is to meet activists and litigators where they are, and ensure groups on the ground at this historic moment of racial reckoning have the resilience and resources they need to help build a truly equitable future for all,’ said Ford Foundation president Darren Walker. 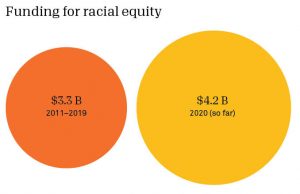 In fact, more money has been given to racial justice in 2020 than during the previous eight years combined, Candid’s analysis showed. However, outside of big announcements for racial justice funding, it’s worth examining how foundations are planning to support equity causes in other areas of their work. A report published in August analysing Covid-19 funding found that of the $11.9 billion in funding for the pandemic, proportionately very little of it was explicitly designated for communities of colour, which have been hit the hardest by the virus and related impacts.

Some foundations released these plans with their announcements. Hewlett’s funding announcement, for example, detailed a plan to approach its ongoing programmes and operations with intentional efforts to add a racial justice lens.

Kellogg’s Racial Equity 2030 is being managed by Lever for Change, a nonprofit that leverages its networks to find and fund solutions to different challenges including racial equity. Applications are open to any group embracing and reflecting the values of racial equity and justice, and they must be led by a team that centres on lived experience and includes communities most affected by the issues as part of the leadership of the project. More details can be found at racialequity2030.org.