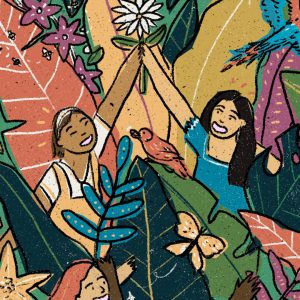 While the Global Resilience Fund has been an experiment in rapidly resourcing feminist activists in responsive and participatory ways, it has also been an exercise in collaboration. The process of engaging a diverse group of funders has provided many lessons to share, with undoubtedly more to come.

Lesson 1: Building partnership at pace requires a deep commitment to transparency and openness from the start

Regular updates, open access to fund information and clear and honest conversations about money and other resources have been key. Grounding initial conversations in intentions and limitations helped partners enter the fund centred in a clear vision of what was possible.

‘Purposeful made it really easy for us to join and welcomed us in,’ said Georgia Booth, Plan International. ‘They were clear about expectations in terms of contributions and partner dynamics which felt very welcoming but also honest and open.’

The fund is fuelled by the intellectual power, networks and organising potential of feminist funders across the eco-system. From the start, we were clear that non-financial contributions were just as important as the money. Partners have nurtured the fund in multiple ways: leading fundraising and philanthropic outreach; with human capacity; translation support; outreach into key regions, movements and populations; co-designing learning and application processes, and so much more.

‘What has really been incredible is the collective trust for the process and genuine intentions of people involved: willing to dive in and just see what happens, trusting that we can learn as we go and support the fund to adapt,’ said Ruby Johnson, Fund Advisor and Former Co-Executive Director of FRIDA, The Young Feminist Fund.

‘The flexibility to allow people to determine what partnership model worked for them also enabled agility, and for grantmaking to be rooted locally in ways that made sense. A fund built on mutual trust, respect and a clear mandate to move some serious resources quickly to young feminists – what’s not to love?’

Lesson 3: If we are open to moving money in ways that make sense for each partner and for the movements they are accountable to, new and exciting possibilities will emerge

Many of the funders in the partnership have gone on to support groups selected through the participatory process directly – through additional funds contributed later in the process – and to ring-fence funds for specific geographies, issue areas and identities.

‘We know that sport hasn’t traditionally been a well understood tool or space for feminist activism but it is increasingly so with the current generation,’ said Maria Bobenrieth, Women Win.

‘We’ve taken the groups that fit our own criteria for funding and are going to support them. It makes a lot of sense to see this fund as a kind of ‘clearing house’ for fantastic work that needs support. We have a responsibility to think about how to action that beyond the resources available to this fund.’

The Central American Women’s Fund, Fondo Semillas and Central America and Mexico Youth Fund have also collaborated to spread funding to additional groups without duplicating grantmaking efforts unnecessarily, increasing the pot of funding and the number of groups that can be supported overall.

‘For us this has been a great opportunity to do something collective and to learn from a new experience. We put aside money to support additional groups in Central America that were not selected in the process,’ said Carla López Cabrera, Central American Women’s Fund (FCAM) ‘For the first time, we will go on to support groups led by young women with disabilities, as well as increase our support to groups led by rural and queer young women.’

‘This has been an incredible experience for us because we got to know many new groups in Mexico we hadn’t been able to reach before,’ said Florencia Bluthgen, Fondo Semillas ‘Thanks to the simple application process we are now going to fund groups in topics that are new to us.’

Lesson 4: To fund in truly intersectional ways requires the lived expertise and political power of many

The fund has become a home for many because of the diverse, feminist, political power of the partnership. We have received pushback from panelists to make application language more trans inclusive, support from Women Enabled and the Disability Rights Fund to invite activists with disabilities into the participatory panel, and specific funding from the Ford Foundation to support sign-language interpretation and accessible application forms.

‘Too many funders think inclusion is hard and don’t try to make their grantmaking processes or funds accessible to persons with disabilities,’ said Diana Samarasan, Disability Rights Fund.

‘The Global Resilience Fund decided from the beginning to open their arms to learning how to include young women and girls with disabilities both as decision-makers in the grantmaking panel and as grant recipients. They understood they could not do this alone and made a commitment to doing their best and changing as needed. Kudos to Rosa and the team for valuing everyone’s input.’

Rosa Bransky is a feminist activist, strategist, researcher and the co-founder of Purposeful.