The rise of middle-class giving in India

This blog is the third in a series of four drawing on the initial findings of a new study of philanthropy initiated by the Working Group on Philanthropy for Social Justice and Peace. These will be published in the run-up to next week’s WINGS Forum in Mexico City, where Philanthropy for Social Justice and Peace will be hosting a breakfast session on the study. For more information about the study see Saturday’s blog, which focuses on individual giving in Russia, while Sunday’s blog looks at giving in Brazil.

Family values, upbringing and religion all play a part, with Hinduism and Islam both mandating giving. One who enjoys abundance without sharing with others is indeed a thief, says the Bhagavad Gita, a 700-verse Hindu scripture that is part of the Mahabharata.

Against this background, the rise of middle-class giving is seen as a significant trend in Indian philanthropy. Ingrid Srinath of the Centre for Social Impact and Philanthropy at Ashoka University talks of ‘rapidly growing “retail” philanthropy from India’s burgeoning middle classes’. Sumitra Mishra of iPartner India talks of an increasing base of individual givers – ‘professionals, working class people, people from the start-up economy. Men and women equally are giving small amounts of money more regularly.’

The average age of individual givers is going down, she says, with people in their late 20s to early 40s giving more than previously. ‘There is an understated story about Indian giving by ordinary people. This makes me feel very hopeful,’ says Indian philanthropist Rohini Nilekani. 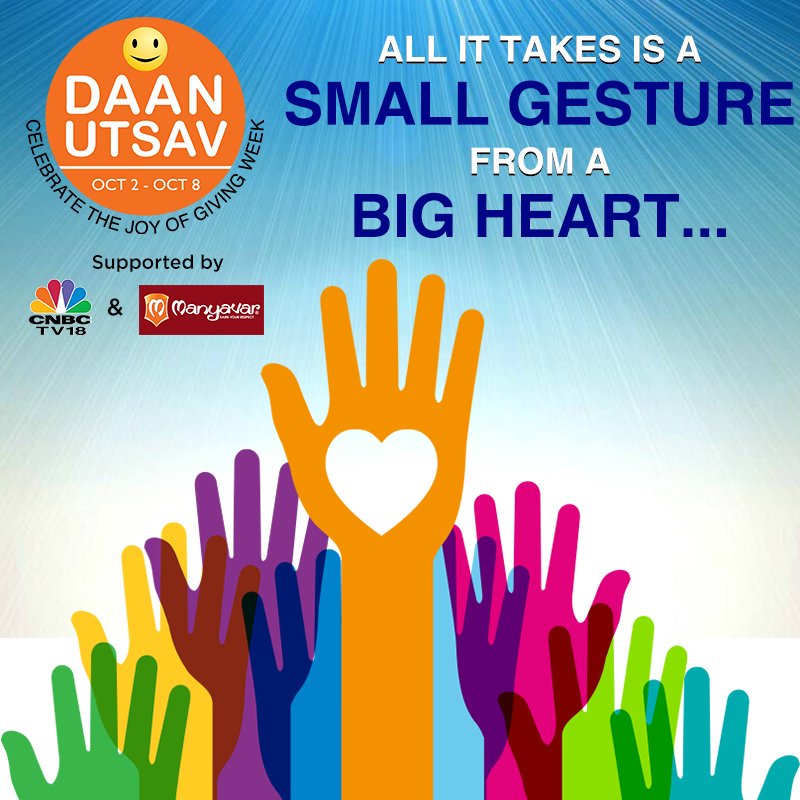 DaanUtsav (formerly Joy of Giving Week) started in 2009 and is now reaching beyond the middle classes to include lower income people as givers. For example, ‘we approached 10,000 women in urban self-help groups and offered to help them,’ says Venkat Krishnan, founder of GiveIndia and one of those who initiated Joy of Giving Week, ‘and they said, “why don’t you ask us to help others?”’ Krishnan thinks it likely that more than 6 million or 7 million are now taking part. ‘It is beginning to have a life of its own.’

According to CAF’s 2016 report, Gross Domestic Philanthropy: An international analysis of GDP, tax and giving, individual giving in India amounts to 0.37 per cent of GDP compared to 1.44 per cent in the US. ‘We certainly have the ability to increase our quantum of giving, at higher and mid-income levels,’ says Srinath.

Where is the money going?
‘Giving is still very much heart led,’ says Mishra. ‘It’s about what pulls my heart, so individual stories of a girl child or a poor farmer or abandoned pets raise most money from individual giving.’ Most giving is ad hoc rather than regular, so givers are more open to direct appeals.

The question as always is whether this translates into real potential for wider public support for NGOs. As in many other emerging market countries, distrust of NGOs is a recurring theme, seen as one of the main barriers to the development of philanthropy, including middle-class giving and crowdfunding. Indian NGO CRY has been fundraising since 1979, the first Indian NGO to do so on a mass scale, which shows it can be done.

Thirty-eight years later 80-90 per cent of CRY’s income comes from small individual donations. Even so, donations are mostly one-off, with only a small amount of regular monthly donations. They are using direct mail, face-to-face fundraising, telephone and online – though ‘online is still minuscule; it has to grow’, says Puja Marwaha of CRY. The average donor gives 3,500 rupees over the year – ‘the price of a meal for two in Mumbai’.

Unfortunately Indian NGOs face what seems like unfair competition. Since 2009 the big international NGOs have been fundraising in India with great success. ‘Our income is shrinking because of competition from INGOs,’ says Marwaha. ‘These big INGOs can put in money for ten years while they build their brand, while we have no other source of income.’ This account is echoed by Amitabh Behar of National Foundation for India. ‘INGOs have deep pockets,’ he says, ‘and the experience to enable them to do it [fundraise] – unlike the Dalit Foundation, for example.’

Online giving also holds out potential. Venkat Krishnan says crowdfunding is doing ‘extremely well’, though money raised is often for individual needs, individual cases and projects. But ‘the potential is far higher than what is actually happening today’, says Krishnan. GlobalGiving recently entered a partnership with Indian crowdfunding website ImpactGuru to test if local NGOs would use a local platform to engage with donors. Results showed ImpactGuru is a potential partner and there is an appetite to use platforms, says GlobalGiving’s John Hecklinger. But all agree that growth will be slow.

Is there potential for funding more complex social issues such as poverty, violence and human rights?
Millions are giving and volunteering as part of DaanUtsav, ‘but informal giving is something people do, and they may just want to do more and more of it’, says Krishnan.

In the long run, however, he sees empathy for poor and disadvantaged people, developed through DaanUtsav, as ‘an important way to achieve greater justice. Gandhi wanted the British to leave India but he didn’t want the British to hate us, or see us as enemies; he wanted them to recognize the situation was wrong and it was right to leave.’ He also instances the India Against Corruption movement as ‘a massively successful crowdfunding campaign for a governance issue’.

‘Self-funded movements’ are a longstanding phenomenon in India – temporary movements to fight a particular issue as when a village is in danger of being displaced by a large industrial project or a dam, financially supported by those affected without recourse to outside sources of funding. Again, this seems to show at least the potential for public funding for more permanent NGOs working for social change.

Caroline Hartnell is a consultant for Philanthropy for Social Justice and Peace and for Alliance magazine. Email caroline@alliancemagazine.org

What would be difficult to evaluate is the value of pro bono services where the contribution is made not in cash but in kind. Volunteers, experts in various fields and many professionals such as doctors forgo their fees from those who cannot afford them. Some eateries and shops similarly gift their goods to those in need. This is fairly commonly prevalent. If evaluated at market prices, these contributions are likely to add up to a sizeable amount as well.

Indian value systems are built on the premise that one takes what one needs and shares what one has in excess. However, class/caste structural injustices have interfered with this natural wellspring of social giving which has a timeless history in this region. While in our times we tend to imagine these social prejudices aren't influencing social giving, a careful analysis of philanthropy in India will reveal that social giving by and large works along structural prejudices. This also manifests in terms of how the State conditions the people: as those worth giving to, and those that aren't, especially that kind of work that is deeply empowering, but is seen as upsetting the caste/class, even feudalistic, systems endemic to much of India. This is so very evident in how India presented its case in the UNHRC yesterday. This needs to change if the massive wealth of India needs to be converted into social giving to solve some very basic problems of the country. This requires explaining to people everywhere - in corporates, in schools, in public offices, etc. - that we have the possibility of overcoming regressive social structures and becoming a people shaped by progressive values. Which means we need to not be shy in addressing the malaise that afflicts our social conditioning. That is when India will become one with its deeply original ethos: of not taking more than what one needs. And this is built into our Constitutional value, per Article 39.

Very interesting piece, with inputs from some of the leading lights...