Are American philanthropists funding the gaps which their tax avoidance has caused?

A report from ProPublica this week, citing leaked tax returns of some of the wealthiest Americans, alleged that most of these billionaires pay little to no tax on their wealth. Among the list are many prominent U.S. philanthropists, including Warren Buffet, George Soros, Michael Bloomberg, and Jeff Bezos.

Many mentioned in the story defended their tax rate – in some cases as low as 0.1 per cent on wealth growth over the period studied – as perfectly legal. They also cited their philanthropy as a more useful way of giving back.

‘I believe the money will be of more use to society if disbursed philanthropically than if it is used to slightly reduce an ever-increasing U.S. debt,’ commented Buffet in a detailed written response to ProPublica. Buffet, the co-founder of the Giving Pledge, plans to give away 99.5 per cent of his wealth.

Buffet’s inclusion on this list is noteworthy, as he has been outspoken in the past about increasing taxes on the wealthy. ProPublica calculated that he paid 0.1 per cent in taxes on his wealth growth between 2014 and 2018 – the lowest tax rate of any of the individuals whose information was revealed in the report. 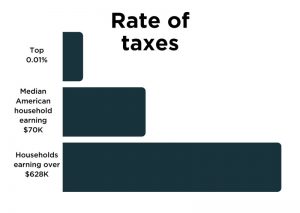 ProPublica’s report revealed that the average rate of tax paid by the top 0.01 per cent is only 3.4 per cent. They calculated this by comparing how much tax the 25 richest Americans paid each year to how much Forbes estimated their wealth grew in that same period. By contrast, the median American household earns about $70,000 annually and pays 14 per cent in federal taxes. This is because the tax code in America focuses primarily on income, while the extraordinarily wealthy  grow their wealth not through income but through other means that are not as heavily taxed.

Many of the individuals responding to ProPublica said that they paid all their legally mandated tax, and like Warren Buffet, pointed to their charitable giving.

‘What Mike gives to charity and pays in taxes amounts to approximately 75 per cent of his annual income’, said a spokesman for Michael Bloomberg. ProPublica calculated the rate of tax that Bloomberg pays on his wealth to be 1.3 per cent, which would make philanthropy most of the sum he gives away.

The data revealed by the report outlines the many ways of legal tax avoidance in the U.S., which does not focus on philanthropy. But these issues are still directly relevant to the philanthropy sector, as many of the billionaires mentioned in the story have their own foundations and others have donated large sums through donor-advised funds, limited liability companies, individual gifts, and other means These members of America’s top 0.01 per cent are giving money – but ProPublica’s report suggests it’s just not through taxes.

Philanthropy as a band-aid

Late last year, I sat down on a call with Tanya Gulliver-Garcia at the Center for Disaster Philanthropy, which helps donors make thoughtful giving decisions when disasters occur. We were speaking about the $16.5 billion given philanthropically throughout 2020 to support pandemic response. At the end of our conversation, I asked her what she wanted to see in the future when it came to funding prevention and response for the next disaster. 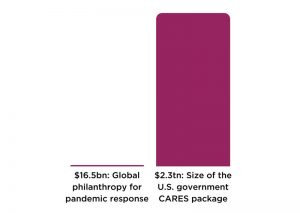 As ProPublica notes, the consequences of allowing the most prosperous to game America’s tax system have been profound. U.S. government budgets have been constrained for decades – the harsh reality of which was exposed over the course of the last year as many, suffering from the health and economic consequences wrought by the pandemic, turned to social support for the first time in their lives and found the system waiting broken.

U.S. philanthropy stepped up and became the band-aid, covering the open wounds of a year of pain and hardship. In 2020, more funding was given to pandemic response than to every natural disaster over the past several years combined. And in many cases, that funding was filling in the gaps of a gutted social system: funding PPE for nurses who had none, buying and distributing Covid-19 tests – a service governments offered in most other countries, and supporting food banks serving individuals who lost their jobs and were unable to navigate old and complex unemployment systems.

The billionaires mentioned by ProPublica point to their philanthropy and say: we also give back.

But are they funding the gaps that their tax avoidance has caused? Looking at the ProPublica report, which explores the way that billionaire tax avoidance has eroded public finances, that might be a reasonable conclusion to draw.

When a depleted social system doesn’t have the funds to support public goods and services that are also overlooked by philanthropy, what happens then?

It’s a question that has probably touched most Americans, including me. Born in the U.S. and raised in Alaska, I attended a journalism programme at the state’s public university. Alaska has the lowest taxes of all 50 states. It instead makes its money off oil revenues – a system that worked until it didn’t. In recent years, the price of oil has experienced dramatic fluctuations, creating massive budget shortfalls. But instead of raising taxes, the state has instead slashed budgets – such as in 2019, when the Governor made deep cuts in, among other things, the public university’s budget. This was not a case where philanthropy stepped in. The programme I graduated from no longer exists.

Philanthropy and tax: not a dichotomy

Often, philanthropy and tax breaks for charity are at held at odds with each other – especially in America, where extremes of wealth meet big philanthropy and a complex tax code. This is the wrong way to look at it, say defenders of philanthropy.

‘It is important to distinguish between tax avoidance and the failure to levy fair taxes. The latter is a failure of government, not philanthropy,’ said Beth Breeze, author of the upcoming book, ‘In Defence of Philanthropy’.

‘Contrasting tax with philanthropy is a common tactic used by critics of big giving, but it is a false opposition. It is perfectly possible to support high levels of progressive taxation and the urgent need to close tax loopholes, whilst also advocating for the merits of widespread, effective philanthropy.

‘There is also no basis for conflating concerns about the wealthy being taxed too lightly with beliefs that philanthropy occurs to distract observers from noticing, or caring about, the amount of tax paid by rich donors. Indeed, the case for higher taxation of the rich has been made repeatedly by many of today’s most high-profile donors.’

Philanthropy’s reputation is sometimes unfairly sullied by its association with fair critiques of the extremes of wealth. Philanthropy is more than just billionaire philanthropy, and it’s certainly more than U.S. philanthropy.

There are many diverse ways of giving that include models like crowdfunding, appealing to small donors like me that want to make an impact; community philanthropy, springing from the grassroots and engaging with the needs of a community at the local level; and social investment, supporting projects for social benefit rather than financial return.

When a depleted social system doesn’t have the funds to support public goods and services that are also overlooked by philanthropy, what happens then?

And philanthropy’s ability to act swiftly, flexibly, and for the longer term allows it to respond in ways that government cannot.

Take for example the work of the Lemann Foundation in developing sovereign vaccine capability in Brazil while the government failed to act – an illustration of the bold and courageous moves that philanthropy can make when government cannot or will not.

In an ideal world, what should philanthropy be for?

This is a question that I’ve been thinking about a lot over my first year at Alliance. As the magazine celebrates 25 years of reporting on philanthropy through 100 issues, we’ve been asking that question of our longest collaborators, as well as our youngest. We’ve hopped on calls with colleagues in every region of the world to discuss what makes for effective and responsible philanthropy.

Here is what we have heard: philanthropy should contribute to a new model of being human, which includes care for our planet, basic income, compassion, harmony, and full space for local agency. Every philanthropic action should make society more equal, more free, and help the climate. It should be international, diverse, and participatory.

But you can’t do all that with one hand and do the opposite with the other.

As Gulliver-Garcia said to me last year: ‘I would love to see philanthropy be able to move more into justice work, organising work, advocacy, and really building communities up, as opposed to having to fill in these gaps that exist. The government needs to step up at these core root issues that are causing discrepancies, and that will allow philanthropy to do great, innovative, creative funding, as opposed to band-aids on feeding programs that exist because people are starving.’

But for that to happen, America’s wealthiest citizens need to contribute a far greater share to public welfare in tax before we begin to talk about their philanthropy.