Gates Foundation will sunset in 25 years 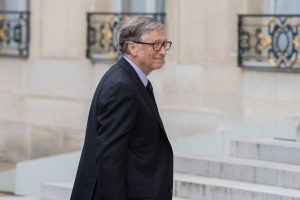 ‘The goal for the foundation is to run for another 25 years,’ Gates said in the keynote conversation with Forbes’ Chief Content Officer Randall Lane. Over its remaining 25 years, the foundation will ‘try and bring infectious disease, or all of the diseases that make the world inequitable, to bring those largely to an end, either through eradication or getting them down to very low levels.’

Gates has never indicated a sunset date for his foundation – but it has been an era of change for the institution since Bill and Melinda’s divorce in May 2021. At the time, Gates and French Gates announced that there would be ‘no changes at the foundation’. But shortly after that, Warren Buffett announced he would be stepping down as a trustee, which left only the divorced pair on the foundation’s board, until four new members were added in January 2022 – the first time the board of trustees has included anyone not named Gates or Buffett.

Another potential huge change for the Gates Foundation is whether it will receive 91-year-old Warren Buffett’s $100 billion fortune upon his death. Since 2006, many have assumed it would go to the Gates Foundation, following a letter that Buffett wrote to Gates and French Gates ‘irrevocably committing’ the majority of his shares to the Gates foundation. However, recent reporting from the Wall Street Journal has suggested that the Buffett family philanthropies – including the reproduction rights focused Susan Thompson Buffett Foundation – might end up getting the bulk of Buffett’s fortune instead of Gates. The reporting has been unconfirmed by Buffett himself.

The recent era of change for the Gates Foundation since Bill and Melinda’s divorce is yet another example of the reality facing ‘Giving While Living’ mega-donors, in which philanthropy takes place not at the end of life, but amid major life events such as births, raising a family, and divorce.

Many have been pointing to the impact on the world of philanthropy that resulted from another Seattle billionaire divorce: that of Jeff Bezos and MacKenzie Scott in 2019. Following their divorce, Scott became one of the wealthiest women in the world and super-charged her personal philanthropy. Over less than four years, she has given away more than $12 billion to nonprofits. Scott married again in March 2021 – the news was announced through his Giving Pledge letter; however, the couple filed for divorce yesterday. His Giving Pledge letter no longer appears with Scott’s, and his name has been recently edited out of the Medium posts where Scott announces her gifts. It remains to be seen whether there will be any impact on her giving.